In a future world controlled by eugenics, how can you fulfill your dreams if you don’t carry the right genes?

Vincent (Hawke) has a dream. He wants to be one of the special people selected for space missions, and watches every one of the dozen or so launches to space stations, colonies, and – when the launch window is correct – deeper space and the outer planets.

There’s a problem, though – Vincent is an In-Valid. He was born naturally, without the ‘benefits’ of gene manipulation, which produces superior humans. And his ‘defects’ mark him out in this DNA-driven world as unsuitable for any worthwhile job. The contrast between him and his brother Aaron (Dean) couldn’t be stronger. Aaron was given every genetic advantage possible, mainly driven by their father’s disappointment at Vincent’s flaws. But Vincent is driven too…

This tale of how your very cellular structure could determine whether you live in utopia or dystopia, shows all the facets of such a world. There’s the shiny clean sterility of the Valids, those given the right start in life. There’s the In-Valids, like Vincent – unable to aspire because his entire body would betray him, living however they can manage. There’s those caught in limbo by chance, such as Irene (Thurman), for whom a single defect survived and therefore places her in the world of the Valids, but never really of that world. And there’s those from whom perfection was taken, like Jerome (Law) a champion swimmer now paralysed after a car accident.

Vincent and Jerome conduct genetic fraud, with Vincent ‘becoming’ Jerome, using donated cells (skin, hair, blood and urine) to gain access to the Gattaca corporation and ultimately his dream. But when a key administrator is murdered at the office,  the police start crawling all over the building, taking genetic samples from everyone they suspect. Although innocent of the murder, Vincent now has to keep one step ahead of the law, whilst maintaining his place on the flight and handling his growing relationship with Irene. 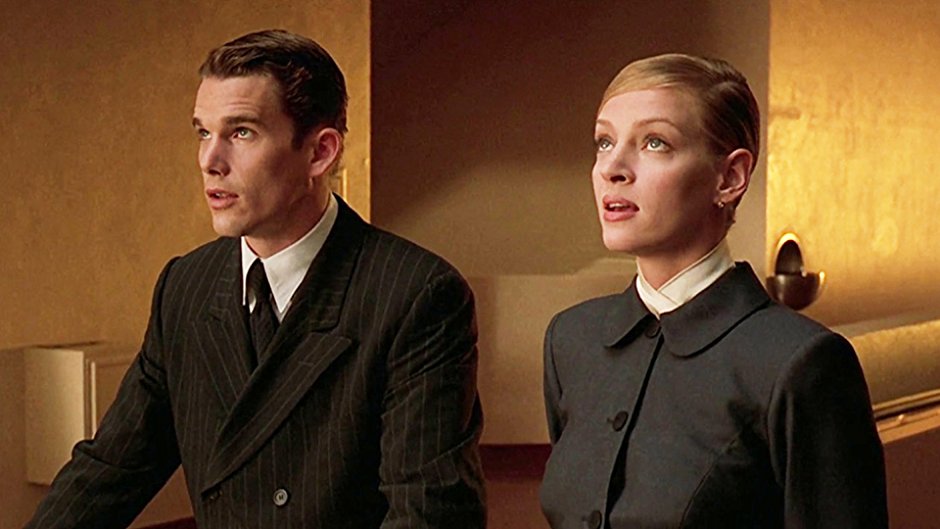 Gattaca wasn’t well received on release, but has rightly gained cult status. It’s not always the paciest of plots, and there are several unexplained plot issues, but overall it’s a great film, with a unique perspective. the leads are all very good, although I’d have liked to have seen Thurman given a little more to do instead of seeming to be a token female in an otherwise male-dominated movie.

Overall, Gattaca is a good science fiction film, concentrating just as much on the science as on the fiction, and it’s a thoughtful, intelligent vision of a genuinely fearful future.